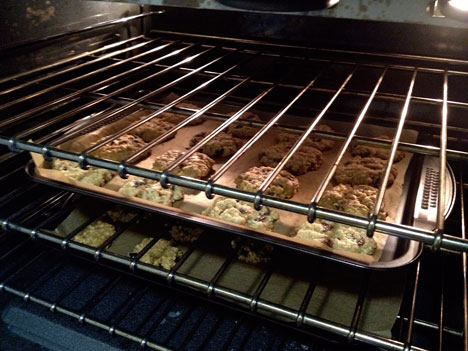 on tuesday, i got up extra early to finish up my last preparations for traveling. but since i’d taken care of nearly everything the night before, i had little else to do besides bake some cookies to bring.

oatmeal chocolate chips are david’s favorite so i was betting the rest of the whitfield boys would also enjoy some. i pretty much always use the recipe from the back of the oatmeal box—it’s an oldie, but goody. to that i add chocolate chips to about three-fourths of the batter for david.

i prefer my oatmeal cookies with fruit, so i stir in some dried raisins, cranberries, apricots, or cherries to the remaining batter for me
(i cannot hope to keep pace with david in the cookie eating department; he’s a champ!). plus, i was pretty sure the boys would prefer the chocolate ones about three to one . . .

our friend susie picked us up at 2:30 and off we went to the airport (thank you susie!!)

our plane was delayed a bit, but so was our connection; no harm done there. for me, that really only means one thing—more knitting time, haha 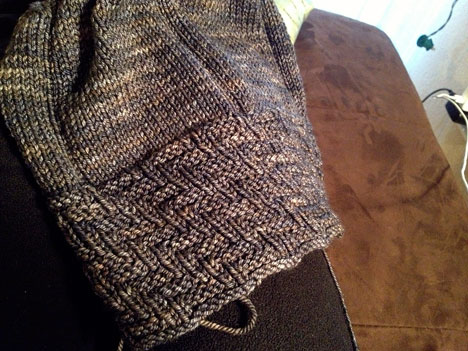 i had cast on a very simple hat in class the previous day to prepare for the trip—i wanted something super easy to knit that did not require extra tools or a complicated pattern. it’s basically a redesign of the slöfock pattern, with new calculations for a brim in herringbone twill rib. 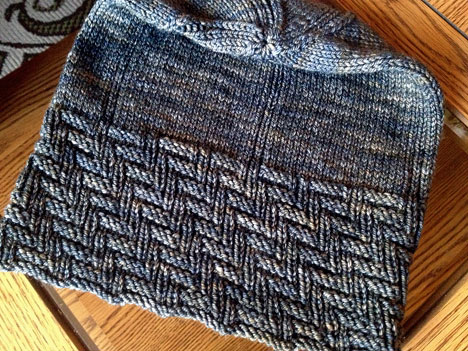 such a quick knit—by the time i arrived in vegas it was done and by the next afternoon, it was washed and blocked; we just need some modeling shots and a final pattern, haha (coming; they are already in the works)

i’m working with the new breathless DK yarn from shalimar in the dirty jeans colorway. the luscious merino/cashmere/silk blend makes a gorgeous slouch hat with the perfect amount of drape and a deliciously soft hand.

up til now, david’s slöfock in shalimar honey worsted has been his fave, but i think this new one (i’m calling it herring, at least for now)  just might come in from behind to win the hat wars . . . time will tell; lara may have to fight me in a duel to keep her beloved slöfock at the top, haha.

anyway, the delay was certainly not a problem and in the end, everything went smoothly, save that we arrived in LV about 45 minutes later than planned.

there were nan and the boys; our visit was their christmas surprise. amad was thrilled, but micah had no idea who we really were, so i’m not sure he was as enthusiastic. he seemed to enjoy running all out in the wide open spaces of the arrivals area though, haha.

into the car we piled to head home. we were pretty beat, so after just a little knitting and chatting over cookies and milk, we all headed to bed.

on wednesday, everyone else went out very early to work and school, while david and i stayed home to explore the neighborhood and do our own thing. we had a completely relaxing day off, doing nothing but what we felt like doing. it was pretty great, haha. 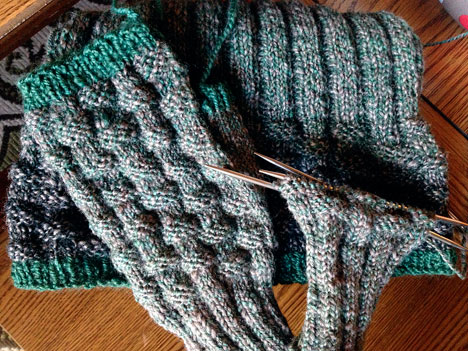 i worked on secret knitting while david slept in—the creel mitts and hat i’m knitting for his christmas present. this project is going more slowly than i’d planned; i’m not sure why, but it just seems to take more effort for some reason. plus, i keep making changes to improve them, which requires backtracking and reknitting—not exactly the way to keep the momentum up.

david just adores anything made from handspun yarn and this set is exactly that; i’m knitting with baa baa huey, a handsoun DK from new hue handspuns. cheryl has put together yarn kits for hats, mitts, and cowls that provide the right amount of gradient yarn for each plus a bit of the solid main color for accents. i’m using the two-tone pine/natural colorway for the hat and mitts, while the cowl is knit in the pine on pine gradient. 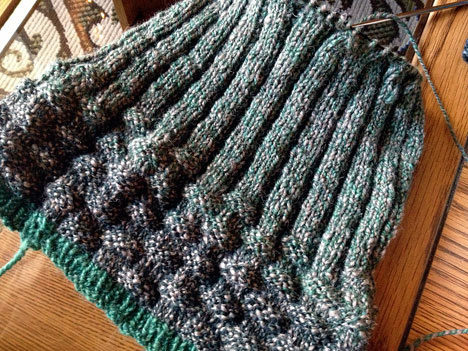 the texture change between the lower part of the hat and the upper is creating a bit of an odd look for the moment, but that will all smooth out when i wash it. i plan to block it with ribs stretched enough to match the size of the basketweave portion.

i am in the homestretch on the hat; i’m just waiting to free up some 4.0 mm DPNs which are currently employed elsewhere (i know; i should just break down, find a LYS, and buy some). the mitts need about a day’s more work.

nan is all excited to learn to knit fingerless mitts, now that she’s seen some. she’s knit socks and hats during our last couple of visits, so it’s natural that she’s ready for something new. in anticipation of this very event, i brought some extra yarn and leftover amounts in my suitcase so she could knit with me during our visit. 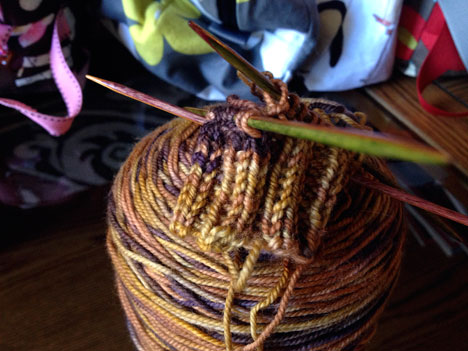 i’ve got her fixed up with the handsies pattern and the start of a mitt for micah last night. she’s really fast; you should see her knit ribbing, wow! she knit this cuff in about five minutes. then a whole bunch of kids noise from the bedroom called her away, haha.

the yarn she’s using is miss babs yummy 3-ply sport in colorway outback. i’ve had this in my stash for a while, just waiting for the right project. mitts and hats for nan and the boys is the perfect use. the colorway may not be available any more, but miss babs has so many other great ones, you won’t be too sad to have to choose from those.

anyway, handsies go super fast; with luck, she’ll have them ready for stocking stuffers, i think. we’ll do what we can to make sure she gets some knitting time this weekend. 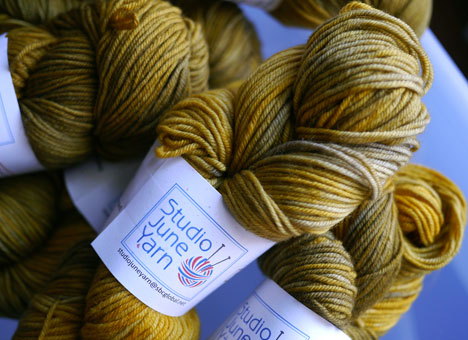 i have a ball of our october club yarn (studio june andrea mae DK, yum) along to knit a quick pair of fingerless mitts for a friend, but i can’t decide which pattern to use. i could go with the club pattern for that month, but i think something less textured might be more fitting. maybe tabata or slöfock? what’s your favorite mitts pattern for DK yarn?

i’ve got two secret knitting projects i’m working away on as well; they are pretty good travel knitting, so i’m hoping to get lots done on those before i get home.

david and i could easily sit inside and knit all day, enjoying each other’s company, quietly chatting about this and that, and doing only enough work to keep things afloat. however, it’s much too nice and sunny to hide away from the outdoors for long and soon enough, we got the itch to go exploring. 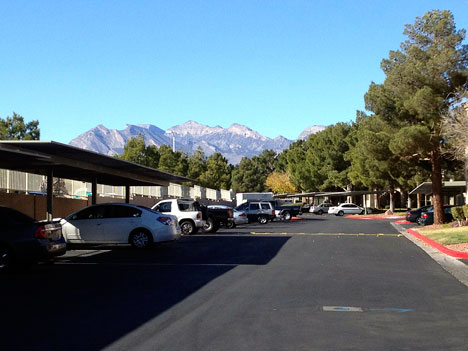 as soon as we stepped outside the flat we saw gorgeous red hills in the near distance—red rock canyon national conservation area. hopefully we’ll get to go over the weekend and for sure, we are going to hoover dam on sunday. nan is working as a tour guide now and is excited to show us around on her days off.

in the meantime, there is plenty to enjoy within walking distance of the flat—nan picked a great spot to rent, with everything they need nearby in the way of shopping, school, and library. 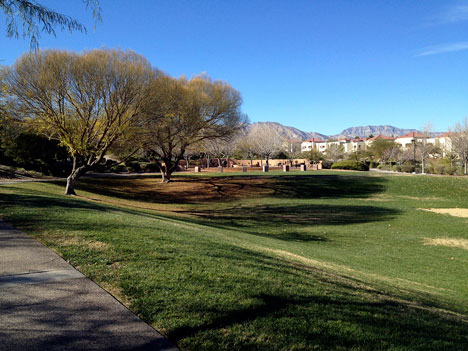 there are several nice areas to go for recreation and running as well—small lakes in one direction and pueblo park in the other, where i ran yesterday and took these photos. pueblo park is a narrow strip of parkland carved out of the center of town that links up with a grand chain of recreational parks strung throughout las vegas. 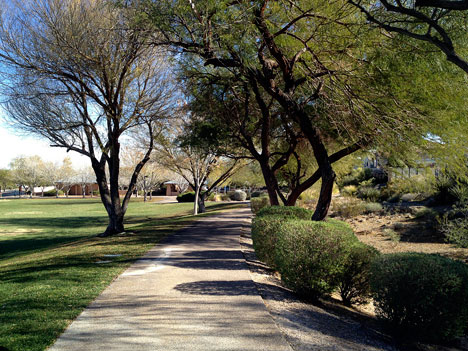 you can bike or run for miles if you like in a clean, safe environment. great for someone like me who, isn’t familiar with town and can get lost if i’m not careful. no danger here of ending up in a high security area that i’m not supposed to be in . . . 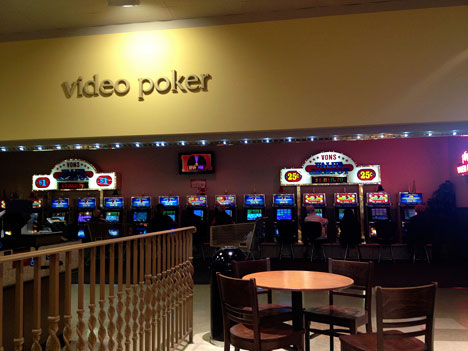 we found the grocery store and starbucks with no problem—haha, toto, we’re not in kansas anymore.

the boys have had school all week, but things are winding down for the holiday. yesterday, micah’s preschool had a little holiday show, which we attended. 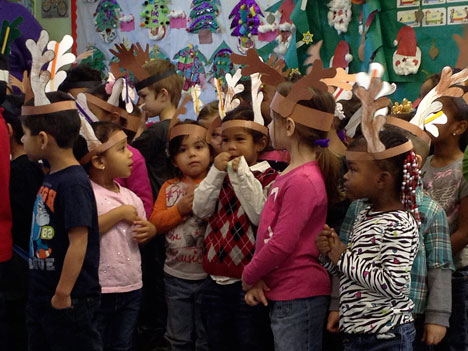 micah is the reindeer in the argyle sweater, hee-hee. i’m pretty sure he had no idea what was going on; while normally quite boisterous and a good singer, he stood in the crowd and pulled on his lip most of the time, getting jostled this way and that. 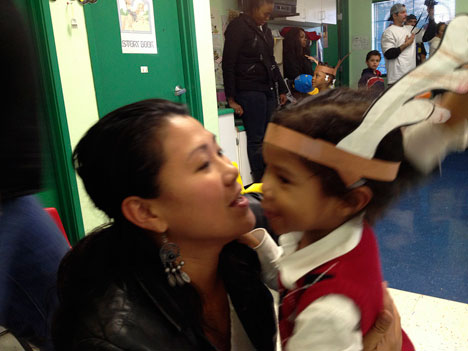 he was pretty glad to head for the safe haven of mommy afterward.

uncle david filmed the whole thing so amad could watch it at home afterward; i took a few photos and knit on my waffle creams sock before and during the performance. 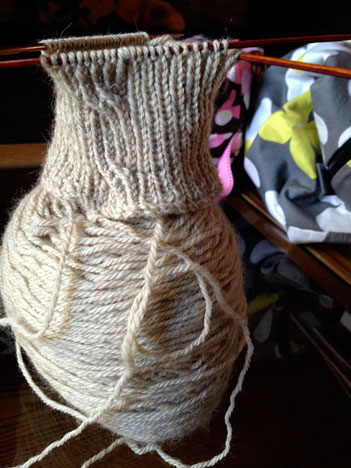 i finished the cuff and am ready to start the leg pattern now, woo-hoo. this is a project i keep in my shoulder bag and though it does not see airtime frequently, it grows in spurts. once in a while it gets and extra-long session in a waiting room or airport lounge. i’m just always glad it’s there. 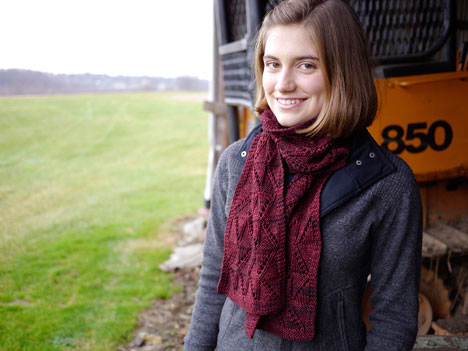 oh hey, i bet you’re wondering how we’re doing on our red scarf fundraiser to make a scholarship for foster care 2 success happen again next year.

we are SO rockin’ that—go blog!!

we have sold 330 patterns for a total of $2310—just about 30 more patterns to go and we have til the end of the month. a super turnout; let’s bring it home now: tell anyone you know who may not have heard or who may have forgotten they intended to take part.

it’s very simple to participate—buy a fall line scarf or cowl pattern in our knitspot pattern shop or our ravelry pattern shop and we’ll put 100% of that $7 pattern price toward the scholarship.

as a bonus, the pattern is a super-quick knitting project which you still have time to knit for christmas; you can’t go wrong.

well, that’s pretty much all i have for today; i’ll try to get back over the weekend with an update; we’ll surely have more cute kid photos to share by monday, haha. i’m going to try to get amad interested in doing some cooking together as well, so as to give mom some knitting time. we’ll see how that turns out, haha.